By Frank Mastropolo on February 28, 20176 Comments 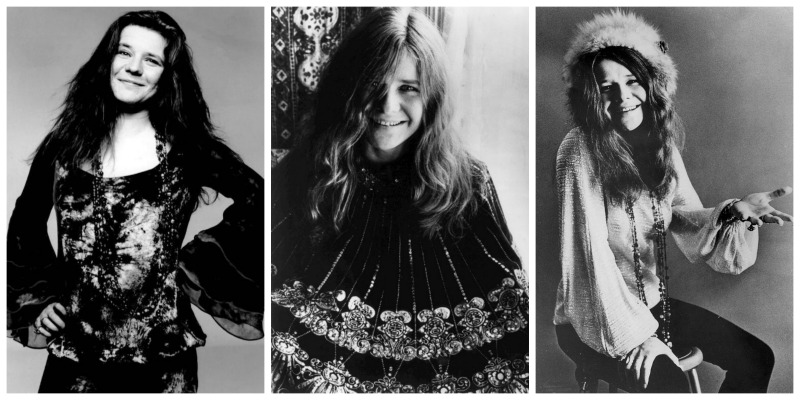 Janis Joplin was called “the greatest white urban blues and soul singer of her generation” by the Rock and Roll Hall of Fame, which inducted her in 1995. Joplin’s powerful, gritty vocals made songs like “Piece of My Heart,” “Ball and Chain,” “Summertime” and “Me and Bobby McGee” uniquely her own.

Joplin, who died in 1970 at age 27 of an accidental drug overdose, burst on the music scene in 1966 as vocalist of San Francisco’s Big Brother and the Holding Company. The band’s manager, Chet Helms, encouraged its members to make Joplin their lead singer. Joplin’s triumphant performances at the Monterey Pop Festival and Woodstock cemented her reputation as the first “queen of rock and roll.”

Joplin split from the band in 1968 to launch a solo career. Her second and final solo LP, Pearl, was released posthumously in 1971 and would become her most successful album.

In the second installment of our new feature, musicians recall “The First Time I Heard Janis Joplin.” (In our debut story, artists looked back at Bob Dylan.) Joplin, we learned, was not always a larger-than-life psychedelic rocker.

Big Brother’s Peter Albin was a folk and bluegrass musician when he first met Joplin in 1963.

Peter Albin (Big Brother and the Holding Company): We used to go up to Berkeley every once in awhile. At midnight on KPFA they had this show called the Midnight Special. Gert Cherito was the MC. She had a folk circle, a circle of chairs and this huge microphone hanging down in the middle of the circle. So you’d grab a chair and you’d do one song and it would go to the person to the left.

The first time I saw Janis, I was sitting next to her. I looked over at this chick and she was wearing a man’s white shirt, scruffy looking, which was obviously a condition on her face of severe acne. But I looked at her chest and her white shirt was kind of open and she wasn’t wearing a bra. As a teenager, I was going, “Ooh, look at that!” [laughs]

David Nelson (New Riders of the Purple Sage): Janis was a new thing to all of us in the Palo Alto community. One of those days, [Jerry] Garcia comes in and says, “Man, you gotta see this. We gotta go down to the Tangent.” The Tangent was a place in Palo Alto that we all played.

We go down there and we’re peering out of the back room. We got to be in the back room because we played there a lot. We’re peering out onto the stage and this lumpy, fat chick [laughs] walks out on stage to sing with Jorma [Kaukonen] and she opens up and she sounds like Bessie Smith or Ma Rainey or one of those people. It was just amazing, totally amazing. We looked at each other in astonishment and then looked back in and watched this. To me that was mind-blowing. How could somebody have that powerful style just naturally?

David Freiberg (Quicksilver Messenger Service, Jefferson Starship): I can remember one time we were driving to Los Angeles. I had a VW bus that didn’t have any windows. It had a mattress in the back and that’s where I would sleep. We had a jug of Red Mountain burgundy, the cheapest rotgut wine you could get, and Janis was singing a song, making it up about Red Mountain burgundy in the back of the bus.

We went directly to the Troubadour because it was a Monday night and they had Hootenanny Night. Anybody could sing and she got up and just killed singing this song she made up with a guitarist. She just knocked the place out. That’s my first Janis.

Peter Albin: We had seen Janis at clubs we played at like the Coffee Gallery on Grant Ave. in San Francisco. Her friends sent her back to Texas. They gave her a one-way ticket. “You have to go home because you’re too fucked up.” She was arrested for shoplifting, she was doing a lot of crystal meth. She was basically a bisexual, she wasn’t very attractive but she did have girlfriends. Her girlfriends sent her back to Texas.

Right after that, in 1966, we started looking for a female vocalist for Big Brother. And that’s when Chet [Helms] said, “I know this girl.” And I said, “I know her too.” He said, “Well, I know her very well, I was the guy who brought her out to San Francisco in the first place.” I said, “OK, well, you contact her then and you bring her up. I think she’d be a perfect fit.”

James Gurley had also heard her. Sam Andrew and Dave Getz didn’t know who she was. So that’s how she came to be in the band. I knew it was gonna be a perfect fit. I knew she was loud, she didn’t really need a microphone at most gigs. And she would definitely fit in with her material, Texas blues and Ma Rainey-type stuff. We did all sorts of things as Big Brother. So I figured, what the hell.

Marty Balin (Jefferson Airplane, Jefferson Starship): We had this mansion in the Haight Ashbury area. Janis was kind of around, I met her at the mansion. We had a pool table and everybody would come over and play pool. Big Brother and her would come over and play, and the Dead, we all would play. Then when I saw her perform at the Fillmore, I was knocked out, it was amazing. I still haven’t seen anybody who could top her version of “Summertime.” I’d be standing right there on stage and it would send chills through me.

Mark Farner (Grand Funk Railroad): Janis and I were tight. We had a kinship. Whenever we did a festival, or sharing a bill, and we went on first, then I would stick around and wait for her or she would stick around and watch us. Her singing was unique. That voice covered a lot of ground. And because of her passion, undeniable passion, that’s what sold Janis. It wasn’t her voice so much. She had a unique style definitely but the passion that girl had. She’d have made a great actress.

John Kay (The Sparrow, Steppenwolf): When The Sparrow was living in its band house in Mill Valley, we played fairly regularly at the Avalon Ballroom and several other clubs in the region. The Avalon is where I for the first time saw Janis. The dressing room was basically a communal sort of gathering place. Everybody who was playing that night, like The Sparrow and Quicksilver and Charlie Musselwhite or whatever, it was one space, a comfortable one, with couches and all of that, and people would drop by and one of them who dropped by was Janis. Sure enough, with a bottle of Southern Comfort.

I had heard about Janis but I had not heard her perform yet. It’s not as though she and I had a conversation, it was more like waving and she was talking to somebody else she knew. So that was sort of peripheral vision on my part.

David Freiberg: I saw both the Big Brother sets at Monterey Pop. The one they had in the afternoon, that her manager wouldn’t let them film. She threw a fit, and said, “Hey, if you want me in this band I wanna be in that movie!” [laughs] So they gave her another performance at night. Everybody’s seen that one in Monterey Pop. That was when she became known to the fuckin’ world, man! Listen to that girl, man! “Ball and Chain” just killed ’em! [laughs]

Genya Ravan (Ten Wheel Drive): The first time that I met Janis was at the Atlanta Pop Festival. We took a plane back together and we sat together. At 10 a.m. she asked me if I wanted a swig. I was not up to drinking in the morning yet. So I said to her, “What are you doing? You’re gonna kill yourself.” And she said, “I like to wake up to a drink.” I started to tell her that she should cut it out and what our conversation boiled down to is that she was very, very lonely and totally seeking love – in all the wrong places.

They put us in competition, but I do get it. I understand people were saying we both sing throaty, from the gut. I don’t know how she felt about it but I know how I felt about it. It was, “Stop comparing us, please!”

I was compared to Janis so much that I even got pissed off that she drank Southern Comfort, ’cause that was my drink.

She was always looking for the right musicians. That’s why she came to Steve Paul’s Scene in New York. She was looking for musicians and wanted very much to have what I had. She wanted that camaraderie. She never got the TLC that I got with my guys. Michael [Zager] and Aram [Schefrin], my partners in Ten Wheel Drive, were like family to me. If you’re going to go out on the road, you need to have some sort of love around you.

I forced her up on stage with me. I said, “Come on, Janis Joplin is in the audience! Come on up, come on up.” She said, “I don’t know any of the songs.” “I know,” I said to her, “we’ll just tag on something.” So I had her tag with me, meaning I had the band play the same chords over and over so that she and I could jam, like two instruments. I think the song was “Twice in My Life.” We’d answer each other and make up lyrics. And we did, and we both had a good time and it was great. My remark after that was, “See, we sound nothing alike!”

John Kay: She was a girl who was having a very hard time within a male-dominated rock and roll world and needed someone to really be there for her. And she might not have had the looks that were a magnet for young good-looking guys who want to pair up with her but she was vulnerable. She was the “blues mama” deal – that was her protective shield.

So I always think of Janis with a degree of sadness because I believed she deserved better than what she got while she was alive.

David Freiberg: There was that addictive thing where she couldn’t get away from the Southern Comfort and then the junk. I know she thought she was just trying to control it. She wasn’t really a far-out junkie but somebody gave her something that was much more powerful than she realized, poor baby. That was much too early for her to go.

Genya Ravan: She was such a lost soul. It was the combination of love, drugs, sex and rock and roll.