Behind the Curtain: The Stress Test of Interviewing George Harrison at Warner Bros. HQ 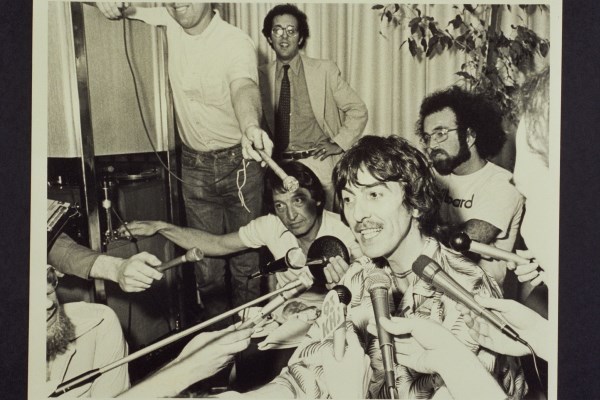 —Ed. note: Sometimes, the thrill of speaking with a hero can be enough for a story – but in this case, Steve Rosen had quite an adventure even GETTING the chance to speak with George…making it a pretty epic day, we’d say.

The day was a California postcard. A startling and fiery sun perched high above in a crystal blue sky, blazed down in diamonds of promise. It was an essential day, a meteorological marvel meant to be stored away for future reference. A day by which all other days would be measured.

“Dude,” a friend would ask the following week, “was last Tuesday the best day ever?”

You tell him it was—a sui generis day like no other. Even if the day itself was all you’d been given, that would have been gift enough. But the weather was merely an underscoring for the occasion, a gilded and golden opportunity to spend an hour with George Harrison.

You would forget how to breathe before you forgot this. Simply saying the words out loud was enough to render you stupid all over again because the event was cloaked in so much magic and improbability. You muttered the words to yourself in a hushed and reverential whisper: “I hung out with a Beatle.”

You think back a week to that irenic meeting. You wondered if maybe Harrison himself had ordered up the perfect day. We all knew George communicated with God regularly and if He was going to listen to anybody, He was going to find a minute or two for a Beatle.

So, anyone who recalled a particularly glorious Tuesday back in 1974, somewhere around August or September perhaps and the presence of just a soupçon of magic imbedded in the sunrays, you can thank God and George (though not necessarily in that order).

The verbal exchange was scheduled to take place at the Warner Bros. Records offices in Burbank, California, a tidy little suburb that was home to the label as well as Disney, various television stations, and a multitude of pre- and post-production film facilities. The buildings were tucked away on Warner Boulevard, a small side street hidden from prying eyes.

Turning up the street, you had to park on one of the smaller residential lanes that stretched out perpendicularly  from the main drag.

I arrived early—my heartbeat already pounding like a drum—but still had trouble finding a place to park. California streets were littered with cryptic hieroglyphs posing as posted traffic warning signs. Woe be to any driver who innocently misinterpreted said postings.

The hammer that would come down on any individual running afoul of a vehicular driving mandate was swift and heartless. Expensive violations. Cars towed. George may have been able to control the weather but he held no sway over municipal parking laws. A spot at the end of a small thoroughfare finally presented itself.

I sat in the car for a minute, attempting to calm a galloping heartbeat that was threatening to stroke me out. The fat end of an hour still loomed in front of me. There were 60 hard minutes of down time before the interview, so I took a moment to run through a  personal inventory.

Not in any self-reflective sort of manner—at least not at this point—but more in an interview-preparedness routine assessment. I had already double-checked everything before I left home. Can anyone say obsessive-compulsive? 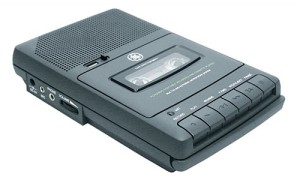 1)      Blank cassettes: I brought 6 x 60-minute tapes. One would have been sufficient. Two would have ensured a failsafe had tape number one malfunctioned. Three was overkill and four and over was insanity. I kept envisioning the tape on one cassette after another either breaking or getting hung up on the tape recorder heads and spooling out like brown spaghetti all over the floor.

This really wasn’t an impossible scenario since these tapes were possibly the worst cassettes ever assembled. They had been purchased at Grant’s department store—a forerunner of Wal-Mart—and cost three @ $1.00. I used them for the first 10 years of my career.

7)      Interview questions: 8 x single sheets 8 ½ x 11. Typed.  Double-spaced. I knew I’d never get through even a quarter of those questions but since I’d brought along a cache of cassettes and batteries sufficient to sit there for over six hours, it seemed counter-productive not to come equally prepared with enough questions to fill up eight sheets of paper.

8)      Cassette recorder/microphone: 1 x GE. I made certain to double/triple up on anything I thought I might need, but I was thinking moronically when it came to the most critical piece of the arsenal. This was a used tape player I’d unearthed in my garage.

The motor did this horrific whining/whirring thing like an asthmatic septuagenarian and every crepitating and crying sound was then picked up by this impossibly cheap plastic microphone I’d purchased for $2.00 at the local electronics store.

Virtually every interview I did for 10 years or more was marred by these mournful squeaks and squeals emanating from the tape machine and then recorded on tape. It was as if the machine itself were being interviewed. On top of that, this GE was top-loading—you hit a release button and a lid would come up. You’d insert the tape, push the lid down and the cassette would engage with the heads.

However, my machine was so old and decrepit, when you hit the Open button to raise the lid, the entire piece would fly off into space [the hinges were broken]. It was like a gun ejecting a shell. One time this plastic piece disengaged, hit me in the face and would have taken out an eye had I not been wearing glasses.

Behind the Curtain: The Stress Test of Interviewing George Harrison at Warner Bros. HQ added by Steve Rosen on January 6, 2015
View all posts by Steve Rosen →

5 Responses to "Behind the Curtain: The Stress Test of Interviewing George Harrison at Warner Bros. HQ"