Jackson Browne, ‘Standing in the Breach’ – The Interview 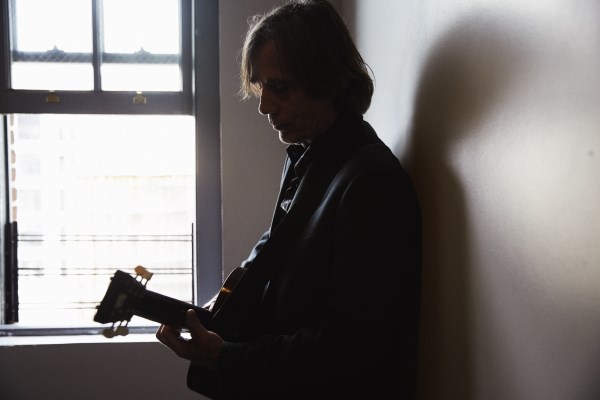 Jackson Browne talks about his new instant classic, Standing In The Breach, and a history of remarkable recordings

Standing in the Breach, the new Jackson Browne album out October 7th on Inside Recordings, is full of the sort of ruminations on love and loss and the state of the world that fans of his remarkable early 70s work will find familiar, with songs of longing about the space between us ultimately giving way to reflections on peace and hope.

Browne has released three excellent live acoustic-based albums since 2005, but Standing In The Breach is his first studio album since 2008’s Time the Conqueror. It opens with The Birds of St. Marks, a song he wrote in 1967 but never captured on tape the way he originally intended.

“I wrote it when I was playing guitar for Nico in New York in the Sixties,” Browne told me recently. “She loved the Byrds, and so did I, and she would often say, ‘Play something like McGuinn.’ So that definitely inspired the writing. But I always imagined it this way, the way it is on the new album.”

Longtime collaborator Greg Leisz plays a McGuinn-like 12-string guitar part on The Birds of St. Marks, a rollicking kick-off for Standing In The Breach.

“If I could be anywhere right now, I would want to be here,” Browne says to me as we discuss the making of the album over a couple of lengthy, energized chats.

He’s imparting a sentiment that runs through the album, but it’s also a key line in the excellent song If I Could Be Anywhere.

“I started writing that song in the Galapagos on a trip,” he confides. “I went there with a bunch of oceanographers. It took me a while to finish the song, but it started being about ocean pollution. I put as much into the writing of the songs as I did as I ever have with anything else, but not in the context of record-making. It was more in the context of living and trying to find an approach to certain topics that I figured were important to me and, I think, important to life.”

“It’s not easy to write a song about plastic pollution. Who wants to hear that? Nobody!”

“Then again, if you go surfing, and I do occasionally, you get in the water and there’s all this plastic shit floating by you, and you realize that the ocean is filling up with plastic. Finding a way into a subject like that for me was a really worthwhile but involved kind of task.”

As we talk it’s clear that the political heart that Browne wore so proudly in the late-70s and 80s beats as strongly as ever. While it may have turned off some fans at the time, Browne seems not to have mellowed but instead developed an empathy in his writing that allows him to speak his truth without turning off listeners who might disagree with his politics.

“There are some things I don’t want to do,” he says flatly of his approach to songwriting. “I don’t want to preach to or harangue people. I want to catch their interest. The song Standing in the Breach is me really writing about an earthquake, and then right away it turns into a song about poverty and endemic inequity. But I’m not really trying to write a rock essay with these things. I want to write a good song.”

“So I wanted to make reference to the earthquake in Haiti, a country that started out as a colony that threw off the yoke of slavery. They became a country by accepting a debt, and they still owe that debt. What’s really going on in that country is the perpetuation of the inequities that gave rise to slavery in the first place. The song tries to refer to that in a way that I hope leads the listener to take that into consideration, because the more we wake up, the more we’re still in a dream.”

“I want to write songs that are thoughtful and consider the problems that we face. I’m not trying to have a song offer the solutions.”

“The solutions lie in our individual choices, the way we live our lives, and what we decide to do in the world. But I think that corresponds to each person’s own understanding. I’m not trying to just write another broadside or polemic. I’m just trying to refer to these things that everybody’s going through, and to refer to them in a way that show that at the heart of it is the idea that I’m glad to be alive now when these problems need to be solved. I’m glad to be here now when I’m needed and when we’re all needed. I’m glad to be engaged with these problems and not living through some escapist idea of wishing I lived a thousand years ago or at some point in the future.”

“So yeah, if I could be anywhere I’d want to be right here.”

Browne wrote the song Leaving Winslow, he says, as a nod to the Arizona town mentioned in Take It Easy, the Eagles hit he wrote with Glenn Frey. And in Which Side Are You On? – a song he debuted at the Occupy Wall Street protests in 2012 – he calls out the “personal allegiances to the forces at play in our society.”

The Long Way Around continues that political vein of songwriting, Browne tackling an English version of a beloved Cuban song.

“Walls and Doors was written by a Cuban friend of mine named Carlos Varela,” Browne tells me. “It’s a very well-known song in Cuba. He’s very well known there for speaking to the Cuban experience. People love and admire his ability to tell the truth about how they really feel. He’s very popular among the youth, even though he’s not a kid anymore. He’s always been a critic of the Cuban situation, and at the same time, he’s not a dissident.”

4 Responses to "Jackson Browne, ‘Standing in the Breach’ – The Interview"