Behind the Curtain: Taking a Trip with Humble Pie

—–The latest entry in our Behind the Curtain category involves journalist/writer Steve Rosen’s trip to Japan with Humble Pie – enjoy below!

It was the summer of 1972 and just a year out of high school, I was headed to Europe. This was going to be my version of On the Road: backpacking, hitchhiking, drinking cheap wine in Paris and sleeping on the beach on a Greek island. My life as a writer was sputtering like an asthmatic rat on a rodent carousel and I wanted to get away.

I was collecting rejection slips like postage stamps. Impersonal, soul-crushing reminders of what a loser I was. “Sorry to inform you…” and “Not right for us at this time.” A thousand ways of telling you without really saying, “You suck. Drive a bus.”  Creem. Circus. Rolling Stone. Guitar Player. They all ignored me. I was a ghost writer. Invisible ink.

None of them wanted me and my reservoir of pride was growing dangerously low so I thought a trip as a bohemian abroad might replenish the reserves.

In-between all the turn downs, I had managed to score a few live reviews for a softcore porn tabloid called the L.A. Star. It was the newsprint type of rag you bought out of vending machines for the express purpose of checking out the massage ads in the back. You didn’t pick up a copy of the Star because you thought you’d find any gloriously insightful musical content there. My writing was never seen much less read by anybody save for someone trolling through the pages looking for the Pussycat Parlor or the Valley of the Dolls massage parlors and accidentally flipping through the reviews.

Adding ignominious insult to injury, I wrote them for free. I tried using the tear sheets as entrée to the record labels in order to score free albums and concert tickets but I think they did more harm than good. No happy endings there.

Still, when L.A. Star music editor Mark Yandle found out I was going to Europe and told me to send back any reviews I might do so he could run them, I jumped at the idea.

Kind of a rock and roll correspondent in the trenches.

No money but the idea appealed to me and at least it was something. In lieu of a paycheck and in order to help me possibly land my first interviews, Yandle loaded me up with names and numbers for managers and publicists. I was more than a little skeptical he knew anybody at all—particularly in England—but I kept my mouth shut.

When your writing was playing second fiddle to massage parlor ads, what did you have to lose? I stuffed the piece of paper into my backpack and headed out for great adventures on the Continent.

Fast forward six months to May 1973 and the gigs were starting to happen. I had returned from my trip to Europe and good as his word, Yandle had hooked me up. Through his connections, I talked to Joe Cocker—the first interview I ever did—Paul McCartney [yes, that McCartney], Curved Air and several other musicians.

More importantly, I became the West Coast correspondent for Sounds, which along with Melody Maker and New Musical Express, was one of the three great English weekly music newspapers of the era.

To this day, that turn of events still shocks me. I had marched into Sounds’ offices armed with editor Billy Walker’s name written on a piece of paper and a gutful of determination. Chutzpah. I was determined to convince this person he couldn’t live without a U.S. representative based in Hollywood, California.  I had seen a concert in London and wrote a review in longhand. 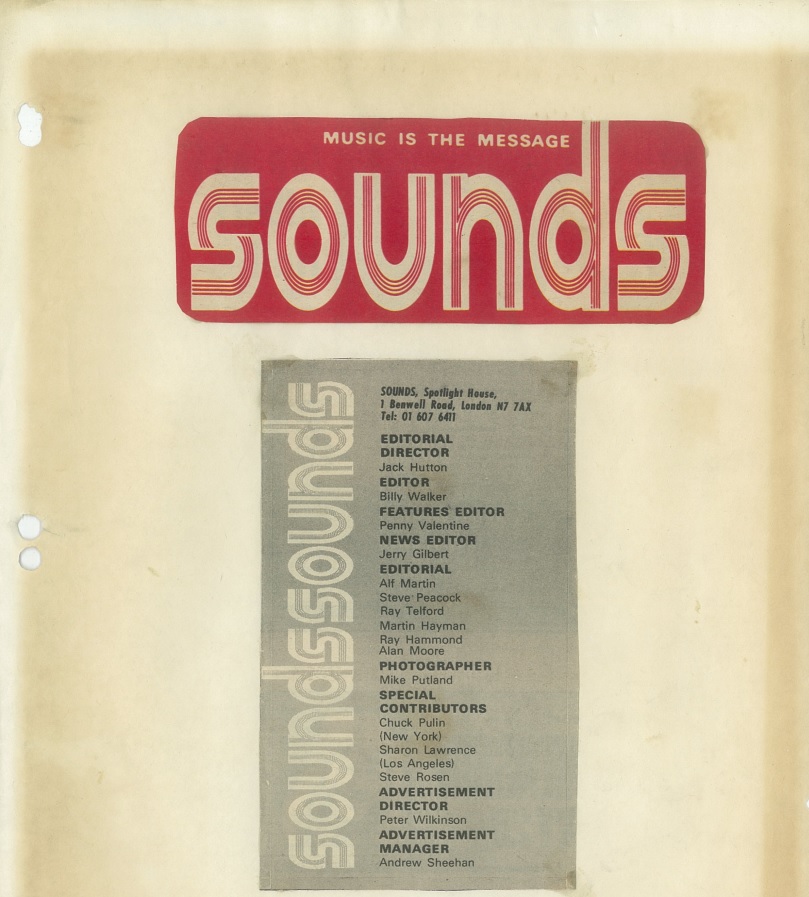 I used that as my writing sample and as I stood in his office shaking like a hypothermic bobblehead while he read it, I realized how important the moment was. Record and management companies, publicists, and promoters would flock to me with arms outstretched bearing gifts of backstage passes, albums and t-shirts. Swag. Free stuff. Interviews.

It didn’t happen exactly that way and in fact required years to build up relationships with all the labels: Atlantic, Warner Bros., Columbia, RCA, MCA, Capitol and others. But the castle doors had been breached. I’d forded the moat and bested the beast—or at least severely wounded it. Slain the dragon…

Not to abuse the medieval terminology but I was fast becoming a white knight in defense of the realm of rock and roll and holding high the twin banners for gallant journalism and valiant guitar solos.

Since I was now inside the freelance fortress and no longer outside smashing my head against the editorial doors, my fortunes started turning. Landing the Sounds gig legitimized me in the minds of other editors. They figured if I was good enough for Sounds, I was probably good enough for them. So I built on that momentum by pitching a Humble Pie story to Zoo World, a bi-weekly tabloid stylistically similar to Rolling Stone [but not as good].

When Zoo World said they’d be interested in seeing a story, I felt like a great white shark—indestructible. It was a new publication for me, they had a lot of insanely good writers working for them, and the zookeepers were inviting me into the menagerie.

Which was why I was sitting in the lobby of the Sunset Marquis Hotel on that profoundly miraculous day. Located just south of the Sunset Strip on Alta Loma in West Hollywood, the Sunset Marquis was an upscale hotel where visiting rockers stayed if they had the money and Humble Pie had the money. In 1973, Pie had just released the double album Eat It—which made it to number 13 on the Billboard Top 200—and  were playing sold-out shows in arenas across the country.

As I sat there waiting for my interview with Dave ‘Clem’ Clempson—the guitarist who’d replaced Peter Frampton—I struck up a conversation with an English journalist also sitting in the lobby. This young kid must have thought I was suffering from a brain aneurism or an acid flashback because when he told me his name, I almost swallowed my tongue and began babbling incoherently.

2 Responses to "Behind the Curtain: Taking a Trip with Humble Pie"