Behind the Curtain: Jamming with Eddie Van Halen

When Edward Van Halen unleashed his devastatingly beautiful tonal fury on the first Van Halen album, guitar players around the globe realized they’d just heard the death knell for everything they ever knew. The architecture of guitar playing was forever changed February 10, 1978 when Van Halen was released. No longer could you simply lay your left or right hand on the fretboard—you now had to use both hands in what would become known as tapping.

Edward had raised the bar. Rewritten the book. Changed the game. Broken the rules. Kicked every guitarist in the ass.

Well, I didn’t know any of that when I first met Edward Van Halen sometime early 1978. I was at the Whisky to see Eddie Money when Michelle Myers—the club’s booker—grabbed me by the arm and said, “There’s somebody you have to meet. He’s Godhead.” Godhead was Michelle’s way of saying, “This is the greatest thing you will ever hear.” I had known Michelle for a long time and she knew I loved guitar players and wrote about them. She pulled me across the room while up on the Whisky stage Money was singing about paradise and holding onto something.

I had heard and knew about Ed—at that point everyone in Hollywood had their radar up for Van Halen—but strangely I had never seen him play. Though I’d been attending shows at the Whisky and Starwood virtually non-stop for the past four years, I had never seen Van Halen perform. It was odd. 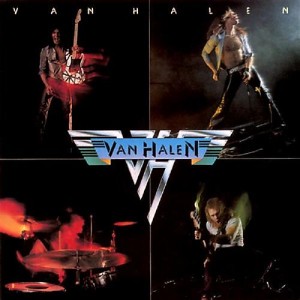 Since their first album release was still at least several weeks away (and maybe months, depending on the exact date of this first meeting), I really had no idea who this person was standing in front of me—and no clue about how profoundly he would revolutionize the electric guitar.

Michelle made the introductions: “Eddie, this is Steve Rosen. Steve, Eddie Van Halen.”He was thin but muscled, had very cool hair and a remarkable smile. It was a kind of smile that made you feel special. It was the smile millions of fans would come to know very well in coming years. He was smoking a cigarette—he would always be smoking a cigarette—that he shifted from his right to his left hand in order to shake my hand. We said hello and immediately he grabbed me and said, “Let’s go upstairs. It’s too noisy down here.”

Grabbing me as if we’d been long lost friends recently reunited, we walked up the rear stairway, down to the end of an empty hallway reeking of burned out cigarette butts and into an empty dressing room, which may have been Eddie Money’s. We began talking and for about the next 20 years that conversation never ended.

I asked him, “Should I call you Ed, Eddie or Edward?” He said, “My parents call me Edward and my brother calls me Ed. My friends call me Eddie—you can call me Eddie.” He said that as if we’d known each other for years. I immediately liked him. We talked about Eric Clapton—he loved Cream— and Jeff Beck—not a huge fan—and Detective’s Michael Monarch who he thought “Sounded too much like Beck.”

I knew the first Van Halen album was coming out soon (I was on Warner Bros. mailing list and I saw it listed on upcoming releases). I asked Ed about the album. “I think it’s good,” he said, the assessment offered up with equal doses enthusiasm and ‘aw shucks’ humility.

“I hope it does OK.” He almost seemed embarrassed by the admission and covered his nervousness with a smile. And there it was again—the famous grin.

Two weeks later or thereabouts, I received the newest shipment of Warner Bros. albums. There was the Rutles’ debut, Manfred Mann’s Watch, Little Feat’s Waiting For Columbus and Van Halen. I dropped the needle down on Runnin’ With the Devil [this was still in the glorious days of vinyl], which was the first track. Was I blown out of my chair? The answer is: No.

When I first listened to the song and then the rest of the record, I just thought it sounded like Deep Purple on speed. Speed kings. I truly didn’t think it was that special.

But then I sat down and really started listening to it and realized in a moment that the parameters of electric guitar would forever be changed. The sound of Ed’s guitar was mesmerizing—it was huge and powerful and yet had so much character and definition. He would later describe it simply as the Brown Sound—meant to convey the idea of something organic, the wood itself crying—but every other guitar player recognized it as the, “Oh my god Eddie sound.”

I knew immediately that Ed-Eddie-Edward Van Halen was the most profoundly important guitar player to come along since the classic rock days of Ritchie Blackmore, Jeff Beck and Jimi Hendrix.

And when it finally dawned on me this was indeed the same guy I’d been talking to just a few weeks earlier, it was hard to make the connection.  That person at the Whisky had been humble, reserved, and soft-spoken. The cat on this record was a fire-breathing dragon, a high-flying eagle.

Here was a Colossus, a giant with an electric six-string voice as loud as thunder. This Ed-Eddie-Edward spoke to gods with his music.

I thought back on our conversation and was blown away all over again how self-effacing he had been. “I hope it does OK,” he’d said. That innocence and lack of guile truly clutched at my heart. By ’78 I had been writing for about four years and had interviewed Jimmy Page, Ritchie Blackmore, Jeff Beck, John McLaughlin and many other knights of the sound table.

The difference was I was meeting Edward at the very onset of his career where these other masters had already found fame. He still had such a vulnerable and fragile mien because he had not yet conquered the world like these other electric explorers. It was beautiful.

Then I remembered, “Didn’t he give me his phone number?” I ran to the closet and went through the pockets of the pants I was wearing that night and there it was—Eddie’s phone number. He wanted me to have it. He told me he was still living at home with his parents and that floored me. It made me like him even more.

Ed and I would remain friends for over 12 years. During that time, I’d pass a lot of hours in his company and at his house. One evening when I was up at his house, we jammed. Ed picked up a bass, tossed me one of his Frankenstein guitars and we jammed. It took everything in me to fight through the nervousness of playing guitar in front of him. But he hated that.

He was uncomfortable with the feeling of being deferred to or treated with kid gloves. So I tried to calm my galloping heart and started playing this guitar lick.

Ed jumped on it. He had me play it over and over while he ran through different bass lines. Besides the sheer joy of playing guitars with him, I saw briefly how his mind worked as a songwriter and how he approached music.

It was like sitting there while John Steinbeck was writing a story. It was sublime, extraordinary and out-of-body all at the same time. I still have a tape of that jam session—Ed recorded everything he ever did—and play it whenever I start believing I was never there.

On another occasion, he came over to my place in one of his Lamborghinis. He may have called and said he was driving over but might not have. Sometimes he’d just be there. He came up the stairs carrying two of the most beautiful 1959 Sunburst Les Pauls anybody had ever seen.

4 Responses to "Behind the Curtain: Jamming with Eddie Van Halen"