Behind the Curtain – Tracking Down Keith Moon 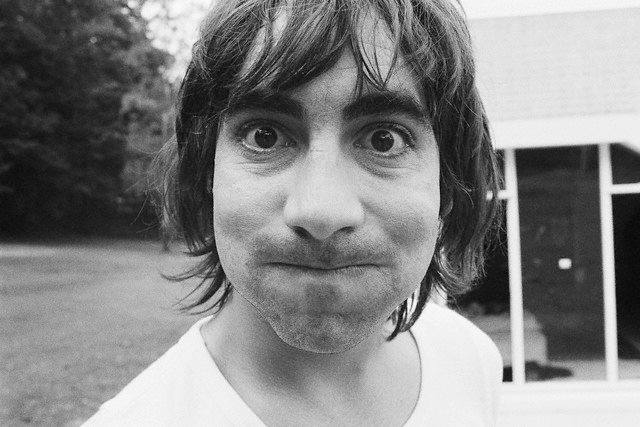 Nothing could have prepared me that day for meeting Keith Moon. His nickname was Moon the Loon and for good reason—Keith John Moon, born on August 23, 1946 was a certified madman.

Maybe he wasn’t certifiable but he was certainly one misunderstood individual. There have been so many stories written about him that I figured some of them must have been made up because there was no way he could have been as crazy as all that. I’m still not sure if he was. But he did throw television sets out of hotel room windows and he did drive his Rolls Royce into a swimming pool. One of his favorite exploits was blowing up toilets.

Sometimes his zaniness had lethal results like the time he was drunk and accidentally ran over his friend, driver and bodyguard, Neil Boland. It would haunt him for the rest of his life.

So when I finally met the insane drummer, I knew the man on the other side of the microphone was not going to be normal. He was probably going to be drunk—he was—and probably have a range of emotions from the riotous to the reserved—he did. In fact the person I met that day turned out to be one of the strangest people I’d ever met—but also one of the sweetest.

After multiple phone calls trying to set up the interview—Keith rarely talked to the press—I was ultimately given entry into his wacky world. But before I get into talking about that encounter, it is important to lay out what happened prior to that meeting.

Earlier that afternoon in 1974, I sat and broke verbal bread with Ron Wood, the guitarist with Rod Stewart’s Faces and soon to become a member of the Rolling Stones. I had met with Ron on one side of town at Warner Bros. Records in Burbank, and, running late, was forced to race along the convoluted and always traffic-jammed streets of Los Angeles in order to make my appointment with Moon. 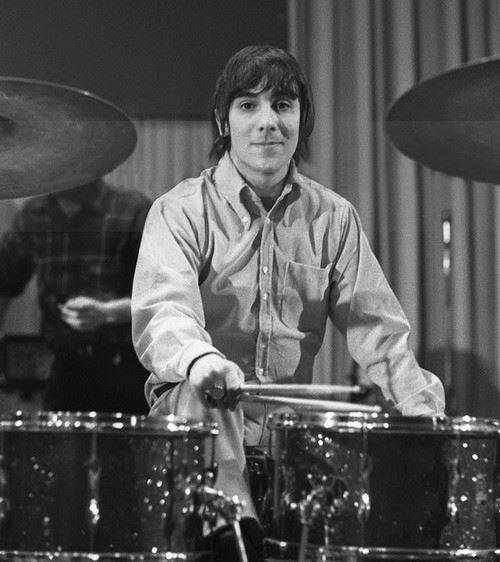 I told Woody I had to hit the road as soon as our conversation was over because a friend of his—Keith Moon—was waiting for me on the other side of town.  Ron, eyebrows raised in an expression meant to convey, “Do not make Moony wait,” gave this by-now frazzled writer a big grin and clasped my shoulder. When I asked him to sign the Faces’ First Step album he scribbled, “Good luck with Keef.”

Which was exactly what I needed as I jumped into my car and zoomed west. I did not want to be late even by a few seconds. It was unprofessional, discourteous and disrespectful and I didn’t want my tardiness to trigger anything in Keith. I headed for Coldwater Canyon where Moon had leased a home. The streets in those canyons were winding, narrow and treacherous but still I barely slowed down.

Living in Laurel Canyon had taught me how to negotiate S-curves and maneuver through cutbacks and that knowledge was now paying dividends.

I scanned the addresses as they flew by my window. Finally I caught sight of the right numbers and onto an elevated driveway that rose to meet the house. There were no other cars in sight and as I pulled in my first thought was, “I’m early” and then my flummoxed brain kicked that idea aside and screamed, “No, you’re late.”

In fact, the house appeared vacant. I had blown through stop signs, disregarded all vehicular common sense, and barely missed clipping several pedestrians on the frantic drive over—and it had been worth every misdemeanor—but now it looked like I might have written down the wrong address. I knew I hadn’t but I was grasping for straws at this point. Nobody lived there. The place felt empty.

Even before approaching the front door and knocking, I knew there wouldn’t be an answer. Feeling out of breath and starting to hyperventilate, I knocked gently. No response. But as my knuckles hit the door, it opened slightly. It had been left unlocked and was slightly ajar. Again, I had competing thoughts burrow into my brain. My first thought was this house had been vacant for a long time and either realtors or robbers had left the front door open. Then in a jubilant sense of euphoria, I shouted inwardly, “No, this was Keith’s place. Who but Moon would leave his front door unlocked?”

I was now waiting outside the front door of this very expensive property. Coldwater Canyon was an exclusive, high-end community and some unknown individual standing on the front lawn in front of an unlocked door was probably not the best idea in the world. I tried knocking again a bit more frantically this time but still no Moon. My heart started to sink a little more with each rap.

Several minutes passed and I’m still standing there because I don’t know what else to do. I was trying to figure out if I was late—and if I was it was only by a couple minutes—or if Keith has simply blown me off. Or maybe he just forgot? But there I was and there Keith wasn’t—a  total eclipse of the Moon. All hope gone, I began the walk back to the car. As I’m opening the door and as if on cue, I heard the roar of very high RPMs that could only originate from the engine in a very fast car. Down the street, I watched in combined horror and fascination as a Porsche screamed up the road, made the left turn into the driveway, and came to a screeching halt a few feet in front of me and ten feet off the cement.

As if the entire episode had been arranged just for me. But in Moon’s world nothing was arranged, and so there parked on the exquisitely manicured front lawn of a very beautiful home, was a man sitting inside a very beautiful car. It was perfect. If I could have written the script for my introduction to Keith Moon, it would have involved being kept waiting—well, maybe not too long—exotic cars and grand entrances.

Out came a visibly drunk Keith Moon with drink in hand.  He walked up to this speechless writer, extended the arm that didn’t have the cocktail in it and announced, “Hi, I’m Keith.” As if I didn’t know. As if anyone wouldn’t know. I extended my hand and shook his. It was a surreal moment. It made me a little sad to see the drink in his hand and knowing he had been driving that way.

But this was the drummer for the Who and normal rules weren’t meant for him.

It is difficult to remember whether Keith apologized for being a few minutes late. He probably didn’t even know he was late but it didn’t matter. Not a whit. This was Moon time and his lunar clock—looney clock—kept time in a fashion only he could figure out. We walked to the front of the house and as if he’d purposely left it that way, pushed open the unlocked door without using a key.