Behind the Curtain – Interviewing Led Zeppelin in 1977

Upon entering Page’s spectacular suite, the first thing I see is a busted telephone and a hole in the wall. Pieces of plaster litter the bed and floor and the telephone is in pieces. Jimmy sees my look of alarm and tells me he ripped the phone from the wall because he felt intruded upon and didn’t want spying ears listening in.

I ignore the destruction and jump into his early history as a studio player; his influences; and how he achieved certain sounds on the Zeppelin albums. I know at that moment I’m doing my job—capturing on tape the thoughts and insights of the world’s most influential guitarist—and I feel like a king. From the second I had been granted access to the guitarist, I recognized the importance of this interview.

And at one point during the conversation, even Jimmy even interrupted himself mid-thought to reveal, “I know the importance of what we’re doing. It needs to be talked about.” He understood.

We talk for about an hour and I can tell Jimmy has had enough. His responses are more obligatory than enlightened so I draw the conversation to a close. I hint at doing a second part and he seems non-committal so I take it as an affirmative.

One night later when we’re returning from yet another Zeppelin show on Caesar’s Chariot, Janine Safer grabs me and says Jimmy will give me 15 minutes. As we walk down the aisle, I’m accompanied to the rear of the plane in a procession with Safer on point, a monster security guard behind her, me, and another bouncer behind me. Everything is done with military precision but for all the world this feels more than anything like a dead man walking.

I greet Jimmy and it’s hard to tell whether he recognizes me from the previous day or not. It is almost impossible to hear him over the white noise roar of the jet engines coupled with the fact that he naturally talks in a voice barely above a whisper. As I’m hunched over and desperately trying to understand what he’s saying, I feel a vise-like grip grab my right shoulder. 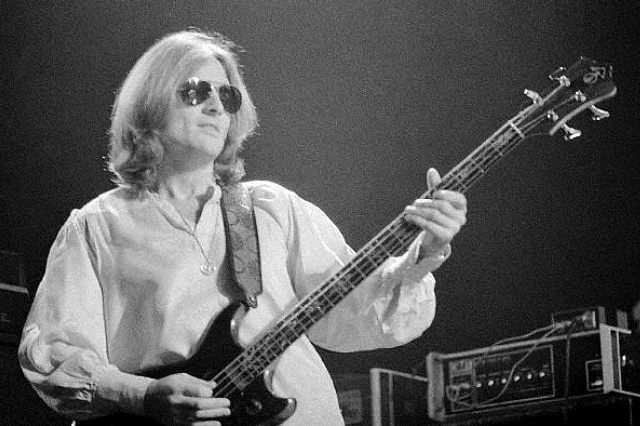 My first thought is, “No way was that 15 minutes.” As I’m thinking this, another hand grabs me by the left shoulder and physically lifts me from my seat.  I rise and incredulously, standing before me is one absolutely furious John Paul Jones—and that’s when my world unravels.

“Rosen, you fucking bastard liar. I should fucking kill you.”

The venom in his voice staggers me. I feel as if I’m having an out-of-body experience. But each time I shut my eyes and open them, I’m still there. Somehow I am still standing on an airplane traveling 600 miles an hour, hurtling towards a destination I know I don’t want to reach. I figure he must be kidding, taking a shot at the new kid, the journalist on the road.

But he doesn’t break into a smile.

What makes this all the more unnerving is that John Paul and I had spent some illuminating time together. He was relaxed and open and seemed to genuinely appreciate our exchange. He told me how much he loved Zeppelin. “The first time we all met in this little room just to see if we could even stand each other,” Jones said.  “Jimmy said, ‘Do you know a number called The Train Kept A-Rollin’?

He counted it out and the room just exploded and we said, ‘Right, we’re on. This is it. This is going to work.’ And we just sort of built it up from there. And now I wouldn’t be without Zeppelin for the world.”

And I believed him. You couldn’t help but believe him.  Led Zeppelin was John Paul’s life and passion and he was forever protecting it—as he told me—from those who would try to run it down.  He was talking about critics in the main, journalists who would tell him how much they admired the band and then turn around and write scathing reviews.

And here confronting me now is all that passion turned poisonous.

The bassist hurls curse after curse and even motions in a gesture carrying with it physical implications. Though I’ve never been in a fight in my life, his veiled threats do not cause me much alarm. John Paul, I felt, was someone against whom I could probably hold my own.  No, it is the standing mountains of muscled beef surrounding him—his security team—that  give me pause.

They shoot me looks that convey a pretty simple message: Make even the slightest motion towards this man before you, and what happens next will surely be one of the less pleasant moments you’ll ever experience.

At that point, it’s hard to determine whether it’s more the fear or embarrassment that has rendered me speechless and immobile. As I fall in and out of moments of lucidity, I’m trying to figure out why I’ve been singled out for Jonesy’s personal attentions when I see there in his right hand, a copy of Rock Guitarists.

It is a compilation of Guitar Player stories collected over the past several years.

He has rolled it up into a tube shape and smacks it repeatedly into his open left palm. I had written the Jeff Beck story gracing the cover and had brought copies for Jones and Page. Peace offerings, I thought. They both knew Jeff of course and I thought the gesture would present me as a writer with a bit of street cred. The magazine is rolled up weapon-style and for a moment I thought he is going to strike me.

Instead he unfolds it, opens it to a page and shoves it at me. I glance down and see words like, “Page…failed to recreate…Zeppelin a grandiose reproduction…” In that second it hits me—this is my Jeff Beck story and I have screwed up in a major way.

This was the first story I’d written for Guitar Player three years earlier and it had not painted Zeppelin in a pretty light. I had completely forgotten what I’d written or I would have never in a million years given copies of this to the band.

I am horrified and embarrassed. Jonesy, the most mild-mannered and politest individual you would ever want to meet, is shaking like a wild beast. There is blood in his eyes and he wants my head on a spike. He can’t have that but he does lance me through the heart when he says, “There is no fucking way you’re doing any interviews. Give me back all the tapes.”

I do a quick mental calculation and think, “These were my tapes and my property. I will not give them to you.” I weigh that thought against what the wall of flesh surrounding me will do if I utter those words and immediately hand over all my tapes. I am in the enemy’s camp and there is nowhere to run.

We finally land. I find my designated car and return to the Ambassador East. I am scheduled to accompany the band for many more days but all I can think of now is sneaking out in the middle of the night before any further vengeance is loosed on me.

I immediately book a plane back to Los Angeles for early the next morning. I crawl into bed and wrote a letter to Jones. I try to explain that what I had written in that piece was simply the ranting and rambling of a novice journalist and I had made those outrageous comments in order to make a name for myself. There is no apology big enough to sooth the savage beast in him but I had to try and least explain myself. I figure I will slip it under his door before departing.

I’m just about to turn out the lights when there is a knock on the door.  The sound scares the hell out of me and I pretend to ignore it but the rapping continues. Finally, Janine yells for me to open up. She saw what had happened.

I could barely face her but she told me to go down to John Paul’s room and apologize.

I walk down to his suite with letter in hand. I rap lightly and the door immediately opens as if he is waiting for me. I can’t even look in his eyes and am about a second away from tears so I simply hand him the letter and walk away. He calls me back and hands me the tapes.

“I hated what you did and I think you’re a lowlife asshole. But you had a job to do.”

Several months pass. It is March 1978 and I at a show for Detective at the Starwood club in Hollywood. I am upstairs with my brother in the VIP lounge when he says, “John Paul Jones is over there and he’s coming over.” I told my brother the story and I laugh when he says this because I know he’s joking. I turn around and see Jonesy walking towards me and think, “Oh, my god. Not again.”

I rise from the chair and face him. I steel myself for another onslaught and am just about ready for any verbal abuse he might fling. What I’m not prepared for is his apology. He tells me he read my letter and understands. He says he is sorry for the way he acted.

Now I am really near tears. John Paul has seen the Guitar Player issue with his feature story in it and I think he was pleased.

We hug it out. I buy him a drink and he returns to his table. It is the greatest moment of my life.

4 Responses to "Behind the Curtain – Interviewing Led Zeppelin in 1977"