Behind the Curtain – Interviewing Led Zeppelin in 1977 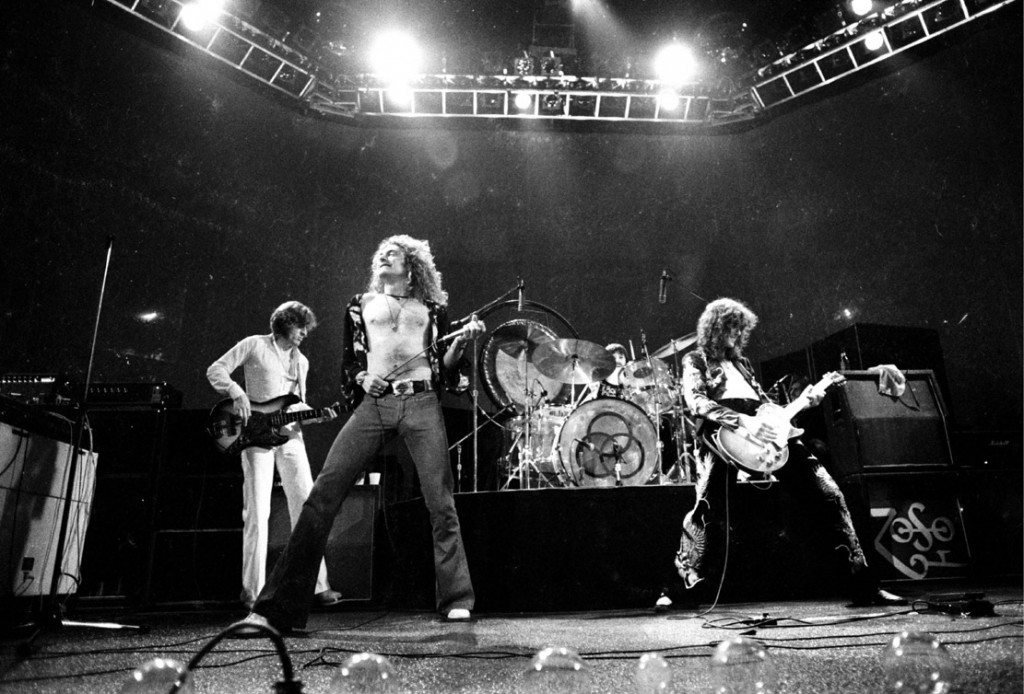 Steve Rosen has been writing about the creatures of rock and roll for 40 years. His stories have appeared in and on Guitar World, Guitar Player, Guitarist, Total Guitar and Ultimate-Guitar.com and virtually every other magazine and website with “guitar” in its title. The Laurel Canyon resident has written seven books—including works on Jeff Beck, Free/Bad Company, Black Sabbath and Randy Rhoads—and has been referenced in too many books to count.

He presides over an audio archive consisting of more than 1,000 hours of recorded interviews with everyone from Aerosmith, Alice Cooper and AC/DC to ZZ Top, Frank Zappa and Led Zeppelin. Rosen has not only broken bread with these iconic characters but he’s also broken hotel room mirrors and even come to blows with them. You can read about some of Steve Rosen’s wonderful rock adventures here in our Behind the Curtain category—and learn once and for all…who is the real Wizard of Ahhs.

It is 1977 and Led Zeppelin is in the midst of their 11th tour.  I’m sitting aboard Caesar’s Chariot, their customized Boeing 707 jet and gazing around the cabin in awe and wonder. Appropriately named after the conquering emperor who was ultimately doomed by an addiction to his own glory, this flying fortress now carries a modern day version of an invading force.

To borrow a phrase from Jimmy Page, a “Guitar Army.” Page, Robert Plant, John Paul Jones and John “Bonzo” Bonham are sitting around the cabin in various overstuffed armchairs as the plane returns them to their base of operations in Chicago. Zeppelin has just annihilated a sellout crowd of pagan revelers in St. Louis and the band is using the 45-minute plane ride to decompress and bring down adrenaline levels.

That I’m here at all is a miracle. Arranging for the interview took nearly seven months, during which time I haggled, cajoled, assaulted and retreated.  Guitar Player Magazine first contacted me in early fall of 1976 because they had bitten down hard on the idea of landing a Jimmy Page interview.

The magazine had made one cursory call to Zeppelin’s Swan Song offices in New York and after getting nowhere, passed the baton to me.

My daily schedule during this period revolved around the all-important phone call to Swan Song—Zeppelin’s record label—to check on the status. I spoke with everyone from Danny Goldberg and Abe Hoch—U.S. and UK vice presidents respectively—to every person in the publicity department including Sam Aizer and Janine Safer [she would eventually save my life, metaphysically speaking].

I left messages and kept hounding them. I realized early on that the Zeppelin juggernaut was a finely-tuned and autonomous machine and the only way I was going to break down the fortress walls was through relentless attacks. I made my first breech when management presented me with the Rules of Engagement. Jimmy Page rarely did interviews and generally despised the press, so the handlers wanted to make sure they controlled every aspect of the proceedings.

Secondly, they provided me with a strict Rules of Etiquette code by which I would conduct myself:

An accord was reached and I received the call—I’d be allowed to stay at the band’s hotel, accompany them on their plane, and be granted interviews with both Page and Jones. I screamed like a maniac and packed my bags. I flew out to Chicago from California just a few days later and met up with the band about two weeks into the first leg of their 11th US tour.

The plane has landed and I am sitting in the back of a limousine alone. I never drove in a car with the band. I’m not really so much concerned about sharing a stretch with the group as I am troubled by one niggling thought: When the f—k am I going to interview Page? I’ve been in Chicago for three days and the only time I’ve seen Page is onstage or on the plane. I’m like a prisoner in paradise. My room is 350-square feet of plush and very chic. But I’m afraid to wander too far away from the phone because I know the second I do, it’s going to ring and I won’t be there (see Rules of Etiquette, Rule 3 above).

Another day passes and I’m sitting in my room after having just devoured a huge Col. Sanders chicken meal and multiple Winchell’s donuts—the craving for grease and sugar is unstoppable. The phone rings and my heart leaps into my throat when I hear I’ll be able to speak with John Paul Jones. I swallow the last bite of an apple-filled donut and high on a sugar rush, I exit my room. Janine Safer—Swan Song’s publicist—accompanies me to John Paul Jones’ room. She makes the introductions and leaves.

John Paul is way cooler than I’d ever imagined. He is a huge part of Zeppelin’s sound—Jones not only plays bass but keyboards, guitars, and helps with arrangements—but is never quite given his due. We talk for well over an hour about joining Zeppelin and touring and a genuine bonhomie fills his suite.

My mission halfway complete, I spend another day swallowing calories and looking out my hotel window. Resignation sets in and I mutter sotto voce—I’m going a bit stir crazy by this point—“What will Guitar Player say if I come back with just the John Paul Jones interview?” I know the answer. They’ll tell me I did a good job and run the story but I’ll know I failed miserably and return a haunted soldier.

Finally on the following day, it happens. “Jimmy will see you now,” says a disembodied voice on the other end of the phone. Once again I grab up my cassette player and notes and walk out into the hallway. Instead of Janine Safer, standing there are two massive sides of beef with walkie talkies. They motion for me to follow them and escort me to Jimmy’s room. This was another rule: Never walk anywhere within the Zeppelin zone without someone accompanying you.

4 Responses to "Behind the Curtain – Interviewing Led Zeppelin in 1977"