Gene Simmons on KISS, the Rock and Roll Hall of Fame, & More (The Interview) 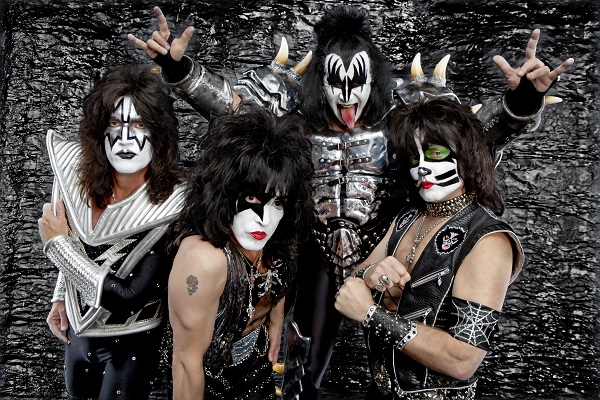 Love him or loathe him, Gene Simmons of KISS never fails to elicit a reaction from the general public and the KISS community at large.

Brash, outspoken and brutally honest, as the custodian of the KISS brand and resident “God of Thunder”, he’s never been afraid to voice his opinion no matter the consequences. As KISS celebrate their 40th anniversary, there’s plenty planned to keep their fans “shouting out loud”—new tour, documentary and a slate of reissues.

However, for the legions of devoted soldiers in the KISS Army the band’s long-awaited induction into The Rock and Roll Hall of Fame –they’ve been eligible since 1995—is not just a victory for the original band—Paul Stanley, Simmons, Ace Frehley and Peter Criss (and all other past and current members of the band) but a chest-thumping victory shared by KISS fans all over the world.

Scorned by critics for decades who deemed them “talentless ass clowns”, rock’s perennial black sheep are having the last laugh and finally being recognized by their peers for their immeasurable contribution to the fabric of rock and roll.

Below, the Demon himself, Gene Simmons, fills Rock Cellar Magazine in on his feelings about the band’s upcoming Rock and Roll Hall of Fame induction and much more in this candid and revealing interview. (Editor’s Note – this interview was conducted prior to the news that KISS will not perform at the induction ceremonies).

Rock Cellar Magazine: For years KISS have been passed upon for induction, any explanation as for why the tide has turned and it finally happened?

Gene Simmons: The Rock and Roll Hall of Fame is a well-intentioned organization. The idea is to honor those people who never learned how to read or write music, never went to music school and don’t know much about music theory but had this passion to distort guitars, to sing lyrics that weren’t acceptable in mainstream society. To sing like black people because rock and roll came from the blues using words like “ain’t” and “baby”.

Well-intentioned though it is, The Rock and Roll Hall of Fame soon became very powerful and the only problem with it in my estimation is all decisions are made by a self-appointed committee. In America I thought it was always “of the people, for the people and by the people”. So the voice of the masses was never heard.

Nobody ever asked me if Blondie, Patti Smith, Madonna, or Grandmaster Flash should be in the Rock and Roll Hall of Fame.

I would fight for their right to be in the Disco Hall of Fame or the Hip-Hop Hall of Fame or the Dance Hall of Fame. Intrinsically, without talking anything away from these artists who are valid in their own musical genre, if you walked up to Madonna or Grandmaster Flash and asked them to define what they do, they would never say rock and roll.

Rock and roll almost by definition is guitars, bass and drums and singing about stuff that maybe mainstream society doesn’t accept.

Rock Cellar Magazine: KISS has been eligible for induction since 1999 and year after year the band was passed over.

Gene Simmons: That’s okay. I know people who don’t like me often see my bravado, this kind of chest-pounding things gorillas do when they kill something. I’ve said real asshole phrases, “The Rock and Roll Hall of Fame doesn’t really matter, I was thinking of buying it.”

Rock Cellar Magazine: But it matters to you.

Gene Simmons: Of course it matters to me. It matters in the sense that you want to be accepted by your peers but in the scheme of things, we’re approaching our 40th year as a band. If someone told me 40 years ago that I would be celebrating our 40th years as a band, you’ll survive members of the band who succumbed to alcohol and drugs, you’ll survive ten different lineups.

You will survive in makeup and out of makeup; you will survive all different kinds of music—thrash, disco, dance, grunge, new romance and survive, persevere and thrive, it means we win!

KISS has always marched to the beat of their own drum. We are anti-fashion. I mean, look at us!

Fashion comes and goes and KISS remains. So if I’m talking to the Gene Simmons forty years ago telling him the only thing we’ll have is the fans, well, we win! There’s nothing wrong with that. In fact, I am proud that there are millions of KISS fans around the world who tattoo their bodies with our faces, name their kids after our songs, have web sites and fanzines and KISS conventions and KISS kruises. It’s beyond anything I ever expected.

Even for me it’s humbling because I tend not to be humble. I tend to state fact, either it’s true or it’s not. Sometimes when I state facts people see it as, “Yeah, you’re full of shit!” No, it’s actually true.

I’ll tell you a quick story. When I was a kid and I first saw Muhammad Ali, he had a cooler name at the time of Cassius Clay. This kid who I never heard of starts pounding his chest saying, “I am the prettiest, I am the greatest!” I said, “What an asshole! ‘I am the greatest!’ Who does he think he is?”

That’s precisely the point, he was stating fact. He is the greatest. It was my fault that I was uninformed that he was the greatest and continues to be. I had too small of a vision to recognize the fact.

Through the years the fans have been furious at me with what I’ve said about our beloved Ace and Peter, about who we are and what we mean. But it’s actually true. But it’s your problem that you haven’t been able to take the truth.

My failing perhaps as a public figure has been, maybe I should have sugarcoated some words because the fans sometimes can’t take the truth. Sometimes truth hurts and I tend to be blunt. Anyhow, The Rock and Roll Hall of Fame was a well meaning organization and it succumbed to nonsense. It’s people in a back room deciding what it was. So finally when they opened it up to votes from the fans we beat every band. We would have buckled out knees if the fans voted they liked Hall & Oates more than KISS.

By the way, I love Hall & Oates but I have no idea what they’re doing in the Rock and Roll Hall of Fame; they should be in a Pop Hall of Fame, no disrespect intended as they’re very talented.

I love Cat Stevens too but that’s more pop than rock and roll. I do know for the first time in their history they’re going to hold the event at a proper arena that holds 18,000 people in Brooklyn. Try to keep the KISS Army out. Good luck with that.

Gene Simmons on KISS, the Rock and Roll Hall of Fame, & More (The Interview) added by Ken Sharp on April 4, 2014
View all posts by Ken Sharp →