Dave Mustaine Riffs on the Internet, AC/DC, and Megadeth (Interview) 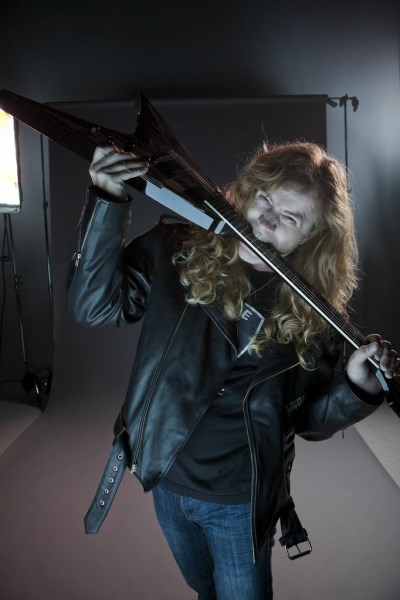 From his early days as a member of Metallica to his award-winning career as the front man and guitarist of the thrash/metal outfit Megadeth, Dave Mustaine has become something of a legend.

Rock Cellar Magazine recently caught up with Mustaine for a spirited chat about his upcoming classical performance, Megadeth, the media, the music business and more – enjoy it all below.

Rock Cellar Magazine: You’re playing a special gig with the San Diego Symphony on April 12. How did that come about?

Dave Mustaine: Basically…Megadeth has a lot of classical influences, I think all great heavy metal bands do. I think it became really obvious how classically influenced metal was. For us, we have a great opportunity to show our fans what ‘classical’ is, and also to show classical fans what ‘metal’ is.

You remember when we were kids, watching movies and stuff. As soon as things start to get scary, what happens? Classical music in the background changes, and it keeps you moving, and feeling, you know?

What I said was, ‘I wanna do the songs that play right when Snow White is about to get poisoned, right when Bambi’s mom is going to get shot.’ It’s always the scary part in the movies.

Dave Mustaine: It’s a long answer to a very simple question, but there’s just so much that can be said to the question. You can tell when someone’s gonna die in the movies – when the music changes!

Dave Mustaine: Yeah. And regarding classical music, most of it is without lyrics, so the music has to do the talking. The songs that we’ve chosen – I don’t know how much you’re into the ‘classical’ thing – but we all know many classical songs. But how well do we know them? Do we really ‘know the ones we know’ or are we just familiar with the melodies?

I was listening to a commercial out of one side of my head the other day, a commercial for Visa, and they had an Olympian athlete who said “Oh, when I’m doing this, I’m listening to something or other, but when I’m out doing cross-country, I listen to classical.” And it was the exact song that I’m going to be playing with the symphony. It’s funny the way people identify with classical music: what it means to chill out, rest, get in the zone, or whatever.

Rock Cellar Magazine: For fans of yours that aren’t able to make it to that special event, will there be any plans to either record it to be released later, or is it a one-off?

You need to be prepared, there will be people screaming out song titles in between stuff, taking pictures, having fun, doing all kinds of stuff.” Plus, I doubt the musicians are going to be used to playing things like Beethoven and hearing someone yell out ‘SLAYERRR’! from the crowd.

I’m looking forward to having a lot of fun, I think…the weird thing, too, about classical – they’re all playing instruments that are fret-less. It’s much more challenging to do what they’re doing than what I’m doing. I’m playing with people that are super, super talented, and for most guys in my situation I imagine they’d get pretty intimidated. But I’ve always played with great guitar players – Chris, Glen, and Marty – guys I’ve played with throughout my career.

While it’d be intimidating for most, I’m really excited about doing it.

Rock Cellar Magazine: A few months ago, Megadeth did that Thrashing Through the Snow: A Very Megadeth Christmas skit for Jimmy Kimmel Live. It was hysterical, and your fans seemed to really love it. Did its success give you guys any idea of ever doing some kind of holiday-themed release?

Dave Mustaine: People have asked us to do that over the years, and I think because of what Megadeth stands there’s kind of a…dichotomy, maybe, the way two things are juxtaposed like that. One is about happiness, peace, and goodwill towards men, and the other is like ‘wake up, you have no idea how much the bad guy is taking advantage of you’ – kind of thing.

I think that’s probably one of the hindrances to doing something like that – to not be a fraud. I’ve seen some of these people do some of these tracks, and they sound really good, but I personally thought that what we did in that skit was a lot better than singing about stuff like Silent Night.

Megadeth has a little bit of a tongue-in-cheek flavor that allows us to do things like the Kimmel skit, but I just don’t know that it would be right for us (to release a holiday record).

Rock Cellar Magazine: When you’re not on the clock as ‘Dave Mustaine of Megadeth’, what do you do for fun? Any specific hobbies?

Dave Mustaine: We’ve really been blessed with our business with Megadeth. We’ve got a huge fan club, and with our social networking and site, it’s great.

Believe it or not – I know this is probably gonna be hard to believe, but on October 31, 1994, we opened up ‘Megadeth Arizona’. It was the first band website ever.

I’m not saying I invented the internet like Al Gore does – which is fucking ridiculous – but we were the first band to ever have a website on the internet. In fact, Gene Simmons even said “I want a website just like Dave’s!” and I was pretty flattered about that. Because you know, say what you will about Gene but he’s a very smart businessman.

And also with the anonymity of the internet now, it seems like it takes a lot of your time figuring out how to handle certain stuff that happens online.

One Response to "Dave Mustaine Riffs on the Internet, AC/DC, and Megadeth (Interview)"