By Rock Cellar Magazine Staff on March 27, 2014No Comment 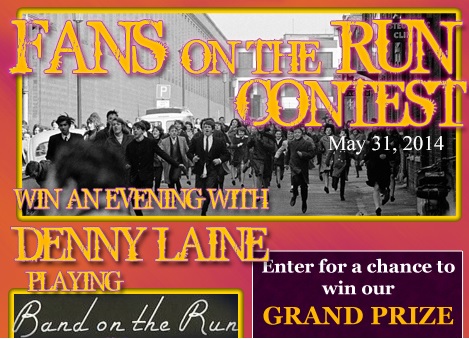 This one’s special. On Saturday, May 31, 2014, we will be hosting a special private house concert/event at a private residence in the Southern California area. (GRAND PRIZE winner receives airfare/accommodations/transportation)!

Performing that night will be Denny Laine, original member of Wings – and he’ll be performing the classic 1973 album Band on the Run (which, of course, featured Paul and Linda McCartney.)

Here’s more information about the contest – read all the fine print and then enter using the boxes below!

Contest begins March 27 and will end on May 7.

*Note* If you’ve already subscribed to Rock Cellar Magazine in the past and would like to enter this contest, just fill out the form below too – you’ll be entered into the pool of potential winners just the same.

The contest has ended!