Top 11 Musicians Influenced By the Beatles

By Frank Mastropolo on February 4, 201420 Comments 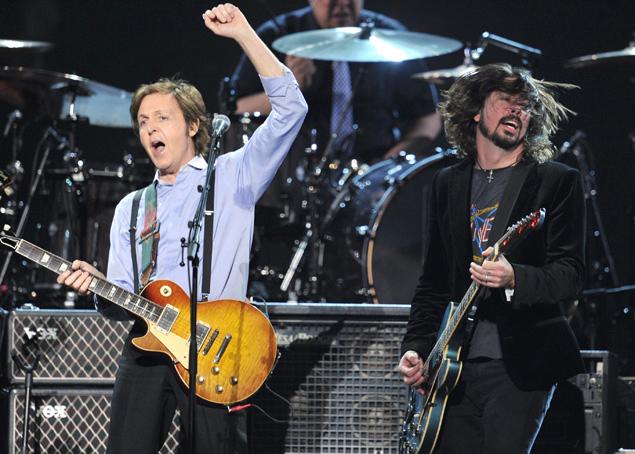 February marks the 50th anniversary of the arrival in America of the Beatles, the group that changed the landscape of the music industry. The Beatles produced the first music video (Paperback Writer/Rain), invented the concept album (Sgt. Pepper) and created Apple, their own record label. But the Beatles’ most important contribution may be the inspiration given to a generation of artists to create their own music.

Here are 11 of the best (in no particular order, mind you).

Before he founded Foo Fighters, Dave Grohl was the drummer of Nirvana, the grunge rock band led by singer/guitarist Kurt Cobain, who died in 1994. Grohl joined Sir Paul McCartney and the surviving members of Nirvana to perform as “Sirvana” at the 12.12.12 Concert for Sandy Relief.

Grohl told Access Hollywood that McCartney and the Beatles inspired him at an early age. “When I was young, that’s how I learned how to play music – I had a guitar and a Beatles songbook. I would listen to the records and play along. Of course, it didn’t sound like the Beatles, but it got me to understand song structure and melody and harmony and arrangement. So, I never had a teacher – I just had these Beatles records.”

Even the late Cobain admired the Beatles, said Grohl. “Even in Nirvana – the Beatles [were] such a huge influence. Kurt loved the Beatles because it was just so simple. Well, it seemed simple… they sound easy to play, but you know what? They’re hard!”

Below, watch Dave and Paul’s band play Band on the Run:

Joe Walsh, guitarist of the James Gang and the Eagles, played in a band during high school but never took music seriously until the Beatles shook the world in 1964.

“I took one look on The Ed Sullivan Show and it was, ‘Fuck school. This makes it! I memorized every Beatles song and went to Shea Stadium and screamed right along with all those chicks,” Walsh told Rolling Stone.  “My parents still have a picture of me all slicked up, with a collarless Beatles jacket and Beatles boots, playing at the prom.”

When the young guitarist heard George Harrison’s solo on And Your Bird Can Sing, he labored to master the Quiet Beatle’s complex riff. Years later, Walsh would marry Marjorie Bach, whose sister Barbara is wed to Ringo Starr. When Walsh told Ringo the story of his relentless practicing, the drummer thought Walsh was insane. Walsh told the Chicago Tribune that Ringo explained, “Nah, nah, nah — he played it twice. It’s two notes playing together!”

Harrison had simply recorded his guitar solo two times and mixed them together. Walsh replied, “I think I’m the only guy who can play it – including George.”

In 1966, the Beach Boys and Brian Wilson recorded Pet Sounds, regarded as the surf rockers’ masterpiece. Wilson’s inspiration came when he first heard the Beatles’ Rubber Soul. “As soon as I started hearing it, I loved it. I mean, loved it!” Wilson told The Times of London.  “I still remember hearing Michelle for the first time, and Girl. What an incredible song! Everything about the way John Lennon sang, and the lyrics he was writing… It sounded amazing. Norwegian Wood is my favorite, too. The lyrics are so good, and so creative… I can’t forget the sitar, too, I’d never heard that before, that unbelievable sound. No one had heard that in rock ‘n’ roll back then, this amazing, exotic sound. It really did inspire the instrumentation I ended up using for Pet Sounds.

Sisters Ann and Nancy Wilson of Heart have said they never wanted to be the girlfriends of the Beatles or the wives of the Beatles – they wanted to be the Beatles. “The lightning bolt came out of the heavens and struck Ann and me the first time we saw the Beatles on The Ed Sullivan Show, Nancy told Believer. “There’d been so much anticipation and hype about the Beatles that it was a huge event, like the lunar landing: that was the moment Ann and I heard the call to become rock musicians. I was seven or eight at the time.

“They were really pushing hard against the morality of the times. That might seem funny to say now, since it was in their early days and they were still wearing suits. But the sexuality was bursting out of the seams. They had crazy long hair. They seemed to us then like the punks seemed to the next generation – way out of the box for the time… Right away we started doing air guitar shows in the living room, faking English accents, and studying all the fanzines… Luckily, our parents were both musical and supportive about us getting into music. So it didn’t take all the begging in the world to convince them we had to have guitars. We taught ourselves to play off the Beatles’ albums and the trusty old Mel Bay chord book. Pretty soon we knew every Brit pop song that was out.”

The Word by Nancy Wilson and the Court Yard Hounds:

One of Billy Joel’s most requested songs is Theme From an Italian Restaurant, a medley of three individual pieces that began as one, The Ballad of Brenda and Eddie. “Then I wrote the other pieces either prior to that or after that,” Joel explained to The Republican. “It was kind of based on side two of Abbey Road. I think the Beatles all came in with individual song fragments and George Martin helped them sew it all together. It’s looked on now as a work of genius but I said, ‘I know what happened. They didn’t finish the songs, they didn’t feel like it, and George Martin said, ‘Why don’t we do this?’ and then they called it Golden Slumbers.”

The Beatles inspired Joel to become a musician during an era of clean-cut teen idols. “The single biggest moment that I can remember being galvanized into wanting to be a musician for life was seeing the Beatles on The Ed Sullivan Show,” Joel told Spinner.

“Hollywood tried to take control of rock ‘n’ roll… they tried to pretty it up, they tried to sanitize it. So they come out with Frankie Avalon and Fabian and Bobby Rydell… and all of a sudden there’s this band with hair like girls… and they played their own instruments and they wrote their own songs. And they didn’t look like Fabian, they looked like these working class kids like we all knew… and I said at that moment, I said, ‘That’s what I want to do. I want to do that. I want to be like those guys.’”

20 Responses to "Top 11 Musicians Influenced By the Beatles"